Schengen Visa Guide Part 1 – What is it and who needs one?

What is a Schengen visa? The topic is both vast and complex. With this in mind, we have decided to create a series of blog posts on this topic to ensure we can answer as many questions and concerns for you as possible.

In a nutshell, a Schengen visa allows nationals of countries outside of the Schengen zone to travel within the area without the need to apply for several visas. They can be issued for a single destination country, or several along the same trip. But who qualifies for these visas, what do you need to apply and where do you start?

What is the Schengen Zone?

Schengen is an area in Europe which consists of 26 countries, where control at their mutual borders has been abolished. This means that if you are a citizen of one of these states, you can move freely between other member states visa-free. They mainly consist of EU members, though there are several countries who are not part of the EU, yet are still part of the Schengen agreement.

The agreement attempts to standardise the process of pre-travel visas to visit member states, and this allows one country to issue the visa which will also in turn allow entry into additional member countries. For example, someone from The Philippines wishing to travel to France, Germany, Spain and Italy in one trip wouldn’t need to apply for a visa for each of these countries individually. They would only need to apply for a Schengen visa at one of the Embassies of these countries and this will allow entry into them all.

This doesn’t mean the visa holder has free movement between all states of course: they must declare which countries they will visit and give an itinerary for their trip, but it still streamlines the process dramatically. Which country you apply to for the visa is dependent on several factors, such as order of travel and length of stay, which we will explore in our next blog post.

The 26 official Schengen area members are:

The countries which are not members of the EU, but have signed agreements in association with the Schengen Agreement are:

You can therefore still travel to these countries using this visa type. There are several EU countries which have yet to sign the Schengen agreement but are legally obliged to do so in the future. You are still able to travel to these states with a Schengen visa in the meantime:

Monaco, San Marino and the Vatican City are not members of the Schengen Area, but they have open borders with the area due to their position. 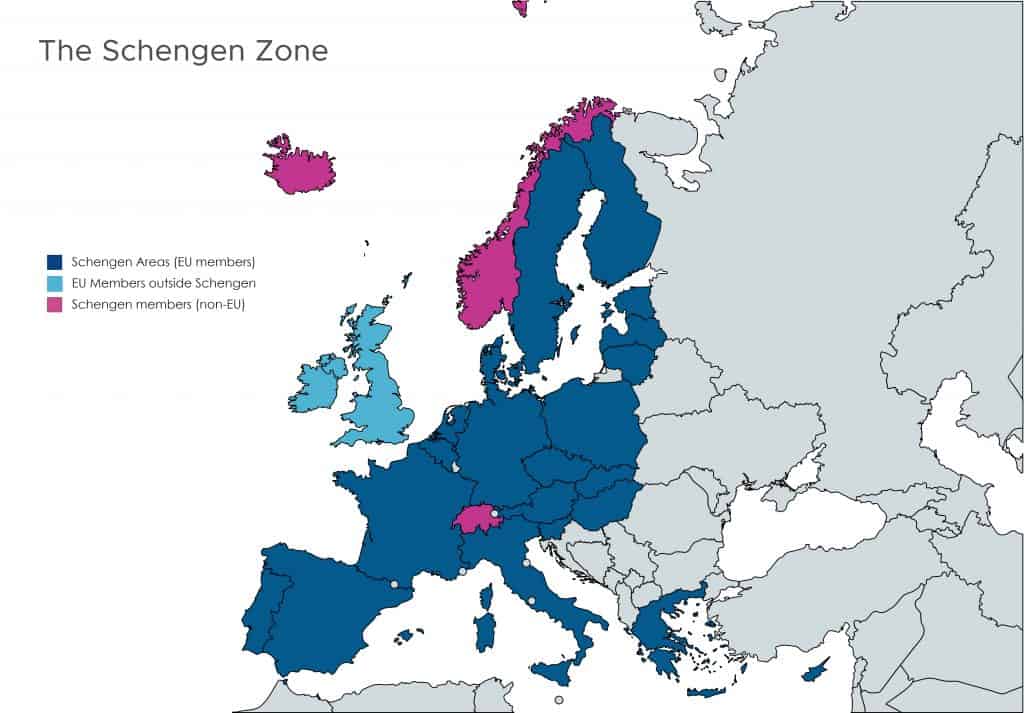 Who requires a Schengen visa to enter these countries?

Citizens of the following countries are required to apply for a Schengen Visa if they wish to visit the zone, regardless of their current country of residence:

Who doesn’t require a visa to enter these countries?

Citizens in the following table do not require a visa in order to enter any member state of the Schengen Area for tourism or business purposes. Citizens of the United Kingdom and the Republic of Ireland do not require a Schengen Visa, although they are not officially part of the zone, they do have free movement within most of these countries.

Are there any passport holders who can’t apply for a Schengen visa?

In our next blog post on this topic, we will look at how to apply for the visa. We will go into more detail regarding which Embassy you need to apply to based on your travel plans and what information you will need to provide. In the meantime, if you do need a Schengen visa and you are based in the UK, we can help. Get in touch with our friendly visa specialists by visiting our site and request a personalised quotation based on your requirements. You can also give us a call directly on +44 (0) 330 088 1142 (option 3), send us a message via WhatsApp on mobile, use our live chat system, or e-mail us at visas@vitalconsular.com.

Melanie is a Digital Marketer at Vital Consular. Before taking up a Marketing role in the company, she spent 3 years building up a rich knowledge of global legalisation processes on the operations team. Having helped hundreds of customers from across the world with their documents, she now loves passing on her specialist knowledge and support via Vital’s blog.