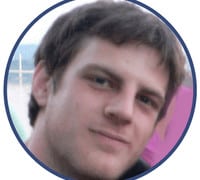 So Sean, the first question I always ask – how are you?

Terrible! Having to go through this awful interview! No. I’m joking. I’m alright actually.

Good to know! So let’s get down to business. When did you start working at Vital?

Can’t you narrow it down a bit more?

That’s as close as I can get.

Being a man of leisure! There was a short period there where I didn’t have a job, so I was doing some writing for a video games blog, writing reviews and such. Unfortunately the website doesn’t exist anymore! Some of my best journalistic writing went down in flames. Before that I was working in Leeds at the Royal Armouries. I’d always said I’d wanted to work in a museum so I fulfilled a goal of mine when I got that chance. One of my other goals was to build a house, which I also fulfilled when I worked at a construction company a few years ago. Other than that, I’d had odd jobs in bars and with catering companies before that, plying patrons with food at events!

Sounds like a varied career so far! Let’s go back a bit then. You went to University. What did you study?

I studied Interactive Design, which entailed learning how to design for websites and for print.

So now you work as a Sales Advisor at Vital. What made you go from Interactive Design, to museum, to here?

I don’t know really. There hasn’t been any dedicated career path that I’ve been following that’s brought me here. I’ve just been taking a look at the jobs available to me and seeing what looks interesting, then going for it. I found the ad for this job on Gumtree, and it stuck out to me a little bit as an ad I could actually enjoy replying to. So I did, and I ended up getting the job.

And you’re coming up to five years here now! Do you remember how your first interview went then? How was your first conversation with Matt? (Managing Director)

Pretty awesome, cos it got me the job! At the time there was only one job up for grabs, and that ended up going to another candidate called Tom. I remember he phoned me up and told me I hadn’t got the job, then he phoned up ten minutes later and told me he liked me so much he’d made a new position for me, and that I started on Monday! So I felt pretty good about that.

You had a new position created especially for you, so that’s definitely worth shouting about! What was it about that interview that made you want to start working at Vital then?

I’d never had an office job before that honestly, all the other jobs I worked required me to be on my feet most of the day. So I thought it’d be nice to have a job which was a bit more relaxed in that way.

I see. And what did the role entail at the time?

It was kind of a duplication of the job that he was offering already. And I quickly found out that it needed at least two people to do the job! There were a lot emails that needed answering with enquiries for certificates and legalisation. We were a small group so it was hard to get round to a lot of these things.

How many of you were there at that point?

Five. It was me and Tom who had just started, then Nicola (Office Manager) and Jodie. And Matt of course.

So three of you left from the original crew! There’s 22 of us now. That’s a lot of change in five years.

Yeah, only me and Nicola left. We’re the OG’s.

From the past to the present. Let’s talk a bit about your role at Vital. What is it you do on a day-to-day basis?

Well I’m essentially a Sales Advisor but I also delve into the customer service realm since I’m usually answering queries post-sale as well. That means a lot of answering calls and emails from our customers, responding to quote requests, speaking to people via LiveChat etc. I also liase with our Corporate Team and try to get them the best leads for their purposes.

Has that changed at all over the five years you’ve been here? Any challenges you have to face that you didn’t have to face before?

The biggest change that’s happened has to be the number of foreign document enquiries we get, which make up over 25% of our business these days, while the number of certificate enquiries are much fewer. It’s probably one of the biggest challenges, since we can’t legalise all the documents ourselves and have to liaise with legalisation partners if we get documents from Italy or Singapore, for example. Each country has it’s own legalisation timeframe and process you have to adhere to, and there aren’t always set prices for each of the services they offer. So it can be difficult to try and contact our partners across timezones and get clarification on pricing and timescales for customers who are usually in a rush! We’re also putting more into the legalisation of export documents. It’s all change.

Definitely sounds difficult! Despite that, what do you enjoy most about working here?

Sounds cliched but mostly just working with a great team of people. Everyone’s pretty nice and we all get along well.

Let’s move away from work then. What do you like to do in your downtime?

I enjoy all the solo artistic pursuits – movies, TV shows, video games, books. I like drawing as well. I used to play the violin until I was about 15, but I have no real love for it anymore, and I’ve dabbled with guitar. I’ve recently started making things with Perler beads, so that’s probably my newest interest, though I bought them more so I had something to do with my nieces when they come around. I’m quite artistic I think. I like making all the Halloween and Christmas decorations around the office when it comes to that time as well.

Your decorations are pretty great! Finally, do you have a favourite quote?

“Life is really simple, but we insist on making it complicated.” – Confucius

Have to agree with that. That’s everything. Thanks for your time Sean!

Ashraf is the Marketing Technologist at Vital Consular, which means he handles all the technicalities involved in bringing this blog to life! He also enjoys creating in-depth articles around current affairs which impact the travel and relocation industry. In his free time, Ashraf relishes travelling as much as possible, and is always looking for quirky spots to take some great photos.